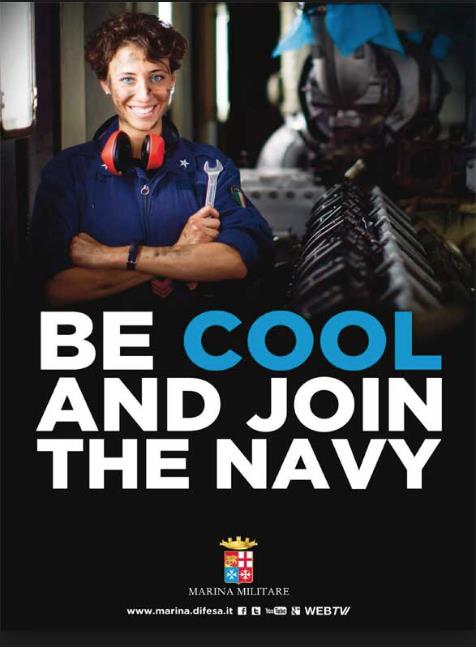 It’s true. We are going through a lot of change. And also enlisting people for the Italian Navy cannot be done in the old classic style. But how “cool” will feel the Italian Marines Latorre and Girone (the two guys still arrested in India for shooting two pirates - pretending to be fishers- in international waters)? And the rest of the Italian seamen will really feel represented by the new recruitment campaign of the Navy?
“Be cool. Join the Navy” is the headline. Even understanding that the Navy and the Air Force are the less provincial Armed Forces as they are constantly in touch with foreign armed forces and are always around the world in exotic missions, by looking at this advertising we feel bad.
There are a couple of reasons for this: the abuse of the English language and a very “light” motivation to convince someone doing one of the most beautiful but hardest jobs in the world.
We do understand that following the need of connecting to a young audience that find the US values very appealing, somebody tried using some fresh and international communication codes… But what a sadness!
The Italian Navy is one of the icons of the “healthy” sides of Italy. Since ever it is very respected from all foreign Navies and is a very useful tool to export the “Made in Italy” concept.
While we like to see Americans wearing “Italians Do It Better” T-shirts, we get melancholic by seeing the Italian Marina (this is the Italian word for Navy), sign the ad calling itself Navy, just for the sake of being more appealing to the young recruits (by the way are we sure that these potential candidates know that “Navy” means the Italian Marina Militare?).
At this point you’ll probably think that the guy writing this article must be “old”. Effectively I am a little. But also the Italian Navy is “old”. Of that kind of age that transforms into classic prestige. A fascination made of history and tradition. From the Vespucci ship to the battle of Premuda and the human torpedoes… A charm coming from the experience of sailing around the world, seeing and doing very special and exciting things that other men and women don’t see and don’t do. All this makes the Navy fascinating. Not “cool”.
“Cool” in English means fresh, but also appealing, wonderful, beautiful. It’s a term more linked to superficial individuality, to fashion,
to be dressed in the proper way.
In the Navy, seamen do much more than feel “up-to-date”: every day they save lives of immigrates, risk their lives in operative missions, use ships, submarines, airplanes and helicopters. They are frogmen, deep-sea divers, sail men and marines.
Moreover this advertising has a presumptuous statement. It isn’t very kind to congratulate yourself. For sure this is not in the tradition of “Officers and Gentlemen”. It should be the role of us citizens to say: “Look at that Seaman! Wow he’s cool!”. On the contrary the Italian Navy awards itself as ‘Queen of Coolness”.
When you study the rules of communication they explain you that an ad needs a strong Promise followed by a very solid ‘Reason Why’, which is the special feature of the product that allows it to fulfill the promise. For example a toothpaste that promises to make your teeth white must then explain why this is possible and which is the special ingredient that allows it.
In our case the promise is ‘Becoming cool?’. Why?
Here the classic system of fashion ads is used. Fashion or perfumes ads do not pretend to convince you. They just show the product and hope to generate interest (how can I explain you why you should like a sweeter or the smell of an essence? Either you like it or not). With the same superficiality the Italian Navy tries to sell you a very important choice: what to do about your life, your career and your future.
There’s something wrong. Imagine a Navy Special Forces Operative that at the question “Why are you risking your life in Afghanistan?”, he answers: “You know, It’s so cool…”. Such a dialogue reminds a fantasy world with the Village People marching on the stage and singing “In the Navy!”.
Once the Navy promised “Join the Navy and you’ll see the world”.
Today it’s enough being trendy. I stand corrected: being cool.